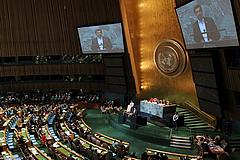 In the Name of God, the Compassionate, the Merciful

All praise be to God, the lord of the Universe, and peace and blessing be upon our Master and prophet, Mohammad, and his pure household, his noble companions and on all divine messengers.

‘Oh, God, hasten the arrival of Imam al-Mahdi and grant him good health and victory, and make us his followers and all those who attest to his rightfulness.’

I am grateful to the Almighty God who granted me, once more, the opportunity to appear before this world assembly. I have the pleasure to express my sincere thanks to H.E. Joseph Deiss, president of the sixty-fifth session for his tremendous efforts during his tenure. I also would like to congratulate H.E Nassir Abdulaziz Al-Nasser on his election as the president of sixty-sixth session of the United Nations and wish him all success.

Let me seize the moment to pay tribute to all those who lost their lives in the past year, particularly to the victims of tragic famine in Somalia and the devastating flood in Pakistan. I urge everyone to increase their assistance and aid to the affected populations in these countries. Over the past years, I spoke about different global issues, and the need to introduce fundamental changes in the current international order.

Today, considering the international developments, I will try to analyze the present situation from a different angle. As you all know the dominance and superiority of human beings over other creatures, lie in the very nature and the truth of humankind which is a divine gift and a manifestation of the divine spirit embodying:

These are some of the manifestations of common divine and human attributes which can clearly be seen in the historical aspirations of human beings as reflected in the heritage of our search for art and literary works both in prose and poetry, and in the socio-cultural and political movements of human beings in the course of history. All divine prophets and social reformers invited human beings to tread on this righteous path. God has given dignity to humankind to elevate his status to assume his successor role on Earth.

It is vividly clear that despite all historical achievements, including creation of the United-Nations, that was a product of untiring struggles and efforts of free-minded and justice-seeking individuals as well as the international cooperation, human societies are yet far from fulfilling their noble desires and aspirations. Most nations of the world are unhappy with the current international circumstances. And despite the general longing and aspiration to promote peace, progress, and fraternity, wars, mass-murder, widespread poverty, and socioeconomic and political crises continue to infringe upon the rights and sovereignty of nations, leaving behind irreparable damage worldwide:

What are the causes and reasons behind these inequalities? How can bone remedy such injustice?
Those who dominate and run centers of global economic power put the blame on people’s aspiration for religion and the pursuit of the path of divine prophets or the weakness of nations and the ill-performance of a number of groups or individuals. They claim that only their views, approaches or prescriptions can save the humanity and the world economy.

don’t you think that the root cause of the problems must be sought in the prevailing international order, or the way the world is governed? I would like to draw your kind attention to the following questions:

There exist tens of other similar questions and of course, the answers are clear. The majority of nations and governments of the world have had no role in the creation of the current global crises, and as a matter of fact were themselves the victims of such policies. It is as lucid as daylight that the same slave masters and colonial powers that once instigated the two world wars have caused widespread miseries and disorder with far-reaching effects across the globe since then.

do these arrogant powers really have the competence and ability to run or govern the world, or is it acceptable that they call themselves as the sole defender of freedom, democracy, and human rights, while they militarily attack and occupy other countries? Can the flower of democracy blossom from NATO’s missiles, bombs or, guns?

the main question is the quest for the root cause of such attitudes? The prime reason should be sought in the beliefs and tendencies of the establishment. Assemblies of people in contradiction with the inner human instincts and disposition, who also have no faith in God and in the path of the divine prophets, replace their lust for power and materialistic ends with heavenly values. To them, only power and wealth prevail, and every attempt must bring into focus these sinister goals. Oppressed nations have no hope to restore or protect their legitimate rights against these powers. These powers seek their progress, prosperity and dignity through the poverty, humiliation and annihilation of others.

Last year, when the need to form a fact-finding team to undertake a thorough investigation concerning the hidden elements involved in September 11 incident was brought up- an idea which is also endorsed by all independent governments and nations as well as by the majority in the United States-, my country and myself came under pressure and threats by the government of the United States. Instead of assigning a fact-finding team, they killed the main perpetrator and threw his body into the sea.

They view Zionism as a sacred notion or ideology and any question concerning its very foundation and history is condemned by them as an unforgivable sin. However they endorse and allow sacrileges and insult against beliefs of other divine religions.

real freedom, justice, dignity, well being, and lasting security are the rights of all nations. These values can neither be achieved by reliance on the current inefficient system of world governance, nor through the intervention of the world arrogant powers and the gun barrels of NATO forces. These values could only be realized under independence and recognition of others’ right and through harmony and cooperation.

Is there any way to address the problems and challenges besetting the world by using the prevailing international mechanisms or tools to help humanity achieve the long-standing aspiration of peace, security and equality?

All those who tried to introduce reforms whilst preserving the existing norms and tendencies have failed. The valuable efforts made by the Non-Aligned movement and Group 77 and 15 as well as by some prominent individuals have failed to bring fundamental changes. Governance and management of the world entail fundamental reforms. What has to be done now?

This is indeed the sole way to prosperity and welfare of human society which is an established and vivid truth. While acknowledging the above truth, one should note that it is not enough and that we must have further faith in that and spare no effort toward its realization.

shared and collective management of the world is the legitimate right of all nations, and we as their representatives, have an obligation to defend their rights. Although some powers continuously try to frustrate all international efforts, aimed at promoting collective cooperation, we must, however, strengthen our belief in achieving the perceived goal of establishing a shared and collective cooperation to run the world.

The United Nations was created to make possible effective participation of all nations in international decision-making processes. We all know that this goal has not yet been fulfilled because of the absence of justice in the current management structures and mechanisms of the UN. The composition of the Security Council is unjust and inequitable. Therefore, changes and restructuring of the United Nations are considered as the basic demands of the nations that must be addressed by the General Assembly.

During last year session, I emphasized the importance of this issue and called for the designation of this decade as the decade of shared and collective Global Management. I would like now to reiterate my proposal and I am sure that through international cooperation diligent and efforts of committed world leaders or governments and through insistence on justice and the support of all other nations, we can expedite the building of a common bright future.

This movement is certainly on the rightful path of creation with the assurance of promising future for humanity. A future that will be built when humanity initiates to trend the path of the divine prophets and the righteous the under the leadership of Imam al-Mahdi, the Ultimate Savior of mankind and the inheritor to all divine messengers, leaders and to the pure generation of our great Prophet.

Creation of a supreme and ideal society with the arrival of a perfect human being, who is a true and sincere lover of all human beings, is the guaranteed promise of God. He will come with Jesus Christ to lead the freedom and justice lovers to eradicate tyranny and discrimination, and promote knowledge, peace, justice freedom and love across the world. He will present to every single individual all the beauties of the world and all good things which bring happiness for humankind.

Today nations have been awakened and with the increase in public awareness, they no longer succumb to oppressions and discriminations. The world is now witnessing more than ever, the widespread awakening in Islamic lands, in Asia, Europe, and America. These movements are ever expanding everyday their specter and influence to pursue the realization of justice, freedom and the creation of a better tomorrow.

Our great nation stands ready to join hands with other nations to march on this beautiful path in harmony and in line with the shared aspirations of mankind. Let us salute love, freedom, justice, knowledge, and the bright future that awaits humankind.

New Evidence of Fraud in 2009 Election