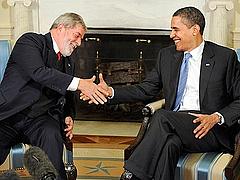 I want to thank you for our meeting with Turkish Prime Minister Erdogan during the Nuclear Security Summit. We spent some time focused on Iran, the issue ofthe provision of nuclear fuel for the Tehran Research Reactor (TRR), and the intent of Brazil and Turkey to work toward finding an acceptable solution. I promised to respond in detail to your ideas. I have carefully considered our discussion, and I would like to offer a detailed explanation of my perspective and suggest a way ahead.

I agree with you that the TRR is an opportunity to pave the way for a broader dialogue in dealing with the more fundamental concerns of the intemational community regarding Iran’s overall nuclear program. From the beginning, I have viewed Iran’ s request as a clear and tangible opportunity to begin to build mutual trust and confidence, and thereby create time and space for a constructive diplomatic process. That is why the Uuited States so strongly supported the proposal put forth by former International Atomic Energy Agency (IAEA) Director General EIBaradei.

The IAEA’s proposal was crafted to be fair and balanced, and for both sides to gain trust and confidence. For us, Iran’s agreement to transfer 1,200 kg of Iran’s low enriched uranium (LEU) out of the country would build confidence and reduce regional tensions by substantially reducing Iran’s LEU stockpile. I want to underscore that this element is of fundamental importance for the United States. For Iran, it would receive the nuclear fuel requested to ensure continued operation of the TRR to produce needed medical isotopes and, by using its own material, Iran would begin to demonstrate peaceful nuclear intent. Not withstanding Iran’s continuing defiance of five United Nations Security Council resolutions mandating that it cease its enrichment of uranium, we were prepared to support and facilitate action on a proposal that would provide Iran nuclear fuel using urauium enriched by Iran — a demonstration of our willingness to be creative in pursuing a way to build mutual confidence.

During the course of the consultations, we also recognized Iran’s desire for assurances. As a result, my team focused on ensuring that the lAEA’s proposal contained several built-in measures, including a U.S. national declaration of support, to send a clear signal from my government of our willingness to become a direct signatory and potentially even play a more direct role in the fuel production process, a central role for Russia, and the IAEA’s assumption of full custody of the nuclear material throughout the fuel production process. In effect, the IAEA’s proposal offered Iran significant and substantial assurances and commitrnents from the IAEA, the United States, and Russia. Dr. EI Baradei stated publicly last year that the United States would be assuming the vast majority of the risk in the IAEA’s proposal.

As we discussed, Iran appears to be pursuing a strategy that is designed to create the impression of flexibility without agreeing to actions that can begin to build mutual trust and confidence. We have observed Iran convey hints of flexibility to you and others, but formally reiterate an unacceptable position through official channels to the IAEA. Iran has continued to reject the IAEA’s proposal and insist that Iran retain its low-enriched uranium on its territory until delivery of nuclear fuel. This is the position that Iran formally conveyed to the IAEA in January 2010 and again in February.

We understand from you, Turkey and others that Iran continues to propose that Iran wouId retain its LEU on its territory until there is a simultaneous exchange of its LEU for nuclear fuel. As General Jones noted during our meeting, it will require one year for any amount of nuclear fuel to be produced. Thus, the confidence-building strength ofthe IAEA’s proposal would be completely eliminated for the United States and several risks would emerge. First, Iran would be able to continue to stockpile LEU throughout this time, which wouId enable them to acquire an LEU stockpile equivalent to the amount needed for two or three nuclear weapons in a year’ s time. Second, there would be no guarantee that Iran would uItimately agree to the final exchange. Third, IAEA "custody" of lran’s LEU inside ofIran would provide us no measurable improvement over the current situation, and the IAEA cannot prevent Iran from re-assuming control of its uranium at any time.

There is a potentially important compromise that has already been offered. Last November, the IAEA conveyed to Iran our offer to allow Iran to ship its 1,200 kg of LEU to a third country - specifically Turkey - at the outset ofthe process to be held "in escrow" as a guarantee during the fuel production process that Iran would get back its uranium ifwe failed to deliver the fuel. Iran has never pursued the "escrow" compromise and has provided no credible explanation for its rejection. I believe that this raises real questions about Iran’s nuclear intentions, if Iran is unwilling to accept an offer to demonstrate that its LEU is for peaceful, civilian purposes. I wouId urge Brazil to impress upon Iran the opportunity presented by this offer to "escrow" its uranium in Turkey while the nuclear fuel is being produced.

Throughout this process, instead of building confidence Iran has undermined confidence in the way it has approached this opportunity. That is why I question whether Iran is prepared to engage Brazil in good faith, and why I cautioned you during our meeting. To begin a constructive diplomatic process, Iran has to convey to the IAEA a constructive commitment to engagement through official channels - something it has failed to do. Meanwhile, we will pursue sanctions on the timeline that I have outlined. I have also made clear that I will leave the door open to engagement with Iran. As you know, Iran has thus far failed to accept my offer of comprehensive and unconditional dialogue.

I look forward to the next opportunity to see you and discuss these issues as we consider the challenge of Iran’s nuclear program to the security of the international community, including in the U.N. Security Council.